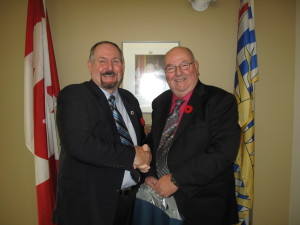 Kettle joined the Kootenay East Regional Hospital District Board in 2003 and was first elected Chair in 2008. “A great deal has been accomplished during his time on the Board. In 2007, the year before Mr. Kettle took over as Chair, the Kootenay East Regional Hospital District taxation was at its highest.  Since then, the taxation has decreased every year until 2014 when it held steady.  To put this into numbers, the 2014 requisition was 39% lower than it was in 2007,” explains KERHD Acting Chair Dean McKerracher. “Yes, some of this is to do with the major upgrade of the East Kootenay Regional Hospital, but much of it is to the credit of Chair Kettle’s leadership which included a regular reminder to us all that we mainly fund only bricks and mortar.”

Kettle was instrumental in advancing projects at the East Kootenay Regional Hospital including the ICU redevelopment and electrical upgrade, a new CT scanner, and an improved isolation room air system which totalled almost $23 million.  In addition, the $4.3 million Invermere Hospital emergency room upgrade was undertaken sooner than expected due to the Kettle’s efforts to advance the project at the provincial level.

“John worked tirelessly in the background with Interior Health, the Ministry, Ministers and MLA’s to advocate for the region and build strong working relationships,” adds McKerracher. “We will miss his leadership.”

Kettle, who did not run for re-election, will spend time with his family over the next few months and hopes to continue to be involved in health advocacy.

The Kootenay East Regional Hospital District covers a large area including the RDEK, the Towns of Creston and Golden as well as their surrounding rural communities. The function of the Hospital District is to provide up to 40% of the funding for equipment and construction projects at health care facilities within the Hospital District, with the remaining cost being covered by Interior Health.