McKerracher Elected KERHD Board Chair for 2015 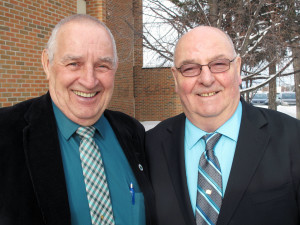 There are some new faces at the helm of the Kootenay East Regional Hospital District Board as Dean McKerracher has been elected Chair and Larry Binks as Acting Chair for 2015.

“I am honoured to have received the support of my fellow Directors and I look forward to continuing to build on the strong relationships we have as a Board and with Interior Health,” says McKerracher. “Having spent the past three years as Acting Chair, I have learned a great deal from former Chair John Kettle and am excited about this new opportunity.”

Regional District of Central Kootenay Electoral Area C Director Larry Binks has been elected as Acting Chair. “I thank the Board of Directors for placing its trust in me and I look forward to the coming year,” says Binks. This will be his first term as Acting Chair.

The Kootenay East Regional Hospital District provides up to 40 percent capital funding for acute care facilities in the region for equipment and facility construction and renovation.

The Hospital District extends beyond the boundaries of the RDEK to include the Towns of Golden and Creston, and the portions of the Regional Districts of Central Kootenay and Columbia Shuswap surrounding those municipalities.